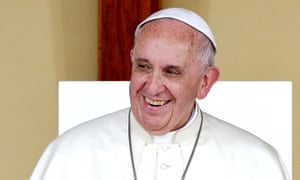 Pope Francis smiles during a meeting with youths on Piazza Vittorio in Turin on 21 June, a few days after his encyclical Laudato Si’ was issued.

Any discussions on how the world can help to solve our current global climate problem should surely be promising news right ? Should we be inspired by the Pope’s latest encyclical or should we be very deeply concerned ?

According to the Bible, the latest Roman Encyclical entitled “Laudato Si” is further evidence of the world increasingly wondering after the Beast power which will assist the USA to enforce a New World Order with mandatory international Sunday laws. Are you ready for the final movements of earth’s history that will be rapid ones ?

In addition to the latest Pope’s letter, the videos below show the advancement of Artificial Intelligence, Robotics, Jade Helm 15 and Military projects that will be designed alongside Papal Rome to muffle your freedoms and religious independence. Sounds far fetched ? The videos below are self explanatory.

The English version of the Laudato Si pdf download is 184 pages long and focuses on “care for our common home”. The following quotes in the encyclical should alarm and concern you:

Danny Vierra shares further details on the Encyclical, Jade Helm 15 and how Robotics and AI (Artificial Intelligence ) is being used by the Military that could threaten your religious liberty and freedoms:

The following video explores more detail in regard to Jade Helm 15 – https://www.youtube.com/watch?t=17&v=vN7cXj8-cGA . If any bit of the video is true, be sure that the time is at hand and it is time to be prepared for the final movements of earth’s history will be rapid ones.

The Defense Advanced Research Projects Agency (DARPA) is an agency of the U.S. Department of Defense responsible for the development of emerging technologies for use by the military. DARPA was created in 1958 as the Advanced Research Projects Agency (ARPA) by President Dwight D. Eisenhower. Its purpose was to formulate and execute research and development projects to expand the frontiers of technology and science, with the aim to reach beyond immediate military requirements.

2. DARPA Atlas: A humanoid robot: Atlas is a bipedal humanoid robot primarily developed by the American robotics company Boston Dynamics, with funding and oversight from the United States Defense Advanced Research Projects Agency (DARPA). The 6-foot (1.8 m) robot is designed for a variety of search and rescue tasks, and was unveiled to the public on July 11, 2013.

Will the above Military projects be used to protect innocent citizens or used to destroy those who uplift civil and religious liberty ?

For further information on how the above Papal power and military powers are aligning to the fulfillment of the  prophecies in the Bible, please see the Third Angel’s Message.